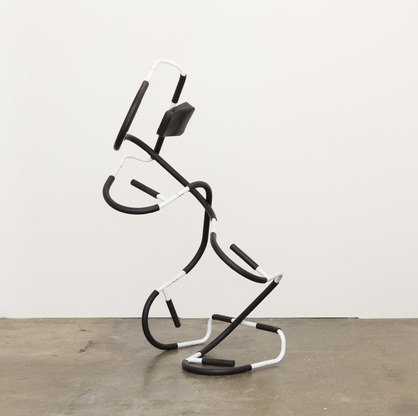 Peter Mohall, "ab-x#6", 2015 abdominal training devices, dimensions variable
Everywhere around me, there were men. Hundreds of them. I say men, mind you, because, despite what the magazines suggested (”Lifting is family fun!”), there were no women or children present.
I recognized the fierceness immediately. The air was filled with violence. On the far side of the room, among the scattered dumbbells and barbells - the ”free-weights” I recognized from the magazines – gathered a muscular band of men about ten strong. Many of them wore camouflage pants and black combat boots. They punctuated their exercises with savage screams and directed murderous glances toward the fifty or so thinner men who were working out near me.
The men on my side of the room were engaged in pulling cables or lifting bars connected to two skeletal, chrome structures immediately before me. All I could hear, aside from the background rock music, were wrenching groans of despair and the monotonous clinking of iron. All I could see beneath the sickly glow of the few working fluorescent bulbs were the sagging shoulders and bent brows of the defeated. So much for joy.
The floor was a dumbbell graveyard. A few were chrome, but most were flat, ugly, black iron, and they covered the interconnected rubber grey mats that passes for a rug. The walls coated in dimpled grey rubber, supported steel racks of all sizes, some apparently to accommodate certain exercises, other to house the iron equipment. The windows were covered with corroded iron bars. The whole hopeless thing looked like a nightmare out of Piranesi.
I hadn’t the faintest idea how to proceed. Should I simply select one of the weights at my feet and start swinging it, as if I were an iron veteran? I bent forward to pick one of the smaller ones up from the floor, when a fist hit my kidney, and a scream pierced my ear.
”Move your ass, stork!”
I sagged to my knees from the blow and looked directly into the eyes of a double amputee. On his chest he wore a shirt that said ”Bert”, on his head a baseball cap that said ”Do the Hustle”. He covered what was left of his legs with a Hefty garbage bag, drawn tight around his waist by his weight-lifting belt. There was no wheelchair in sight. The size of his massive arms made me wonder if he’d ever used one.
”I beg your pardon,” I muttered, feeling my aching kidney with one hand, shamed that I had inconvenienced him. ”Can I help you get a weight?” I asked, in an attempt to remedy the situation.
”Fuck off, new meat!” he roared scuttling off to join his huge friends at the free weight sector.
By the time I regained my feet, this raucous band turned on me. At first, the chant was barely audible above the thunderous pulse of heavy-metal music, but it soon grew deafening,
”New Meat! New Meat! The group sang, led by Bert, the snarling gargoyle, ”NEW MEAT! NEW MEAT!